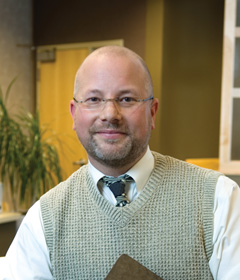 Dr. Eric Heegaard is a Minnesota based gynecologic surgeon whose surgical practice has been on the forefront of minimally invasive gynecology for over 2 decades.  He was one of the first surgeons in the twin cities to perform a laparoscopic subtotal hysterectomy (removing the uterus while leaving the cervix in place) and more recently was the first surgeon at Fairview Southdale Hospital in Edina, Minnesota to perform a total laparoscopic hysterectomy using the Davinci Robot.  Dr. Heegaard is one of a small group of gynecologic surgeons in Minnesota credentialed to use the Davinci Robot and is a proctor for other gynecologists who are learning to use the Davinci system.  Dr. Heegaard’s interest in minimally invasive management of fibroids (benign uterine tumors) led him to start the Midwest Fibroid Treatment Center, the first of its kind in Minnesota.

Eric Heegaard wasn’t always going to be an OB/GYN physician.  At one point, he dreamed of a career in the music industry.  He loves the singer/songwriters like James Taylor and Crosby Stills & Nash, so, after college, Eric moved to San Francisco with his two bandmates to pursue his passion at that time, singing and playing guitar and bass.

The experience was fulfilling, but superstardom wasn’t in the cards, so Eric loaded up his ’73 Dodge van and headed to Seattle where he attended medical school at the University of Washington.

While going to school and trying to make ends meet, working at a lab and a nursing home, Eric continued to pursue his music, as well as another passion…cooking.  He loves to cook and loves to watch cooking shows. He also makes the most smoky, creamy, fabulously fantastic spaghetti carbonara you’ll ever taste.  His world-famous salsa verde is not bad, either!

It’s that enthusiasm, humor, and complete commitment that patients respond to in Dr. Heegaard.  “It overwhelms me to think how lucky I am to have found a doctor who is so obviously competent and trustworthy, while also caring and compassionate. You are the best.” Wrote one satisfied new mom after successful infertility treatment.  Dr. Heegaard credits his dad for steering him in the right direction.  His dad was a general practitioner in their hometown of Alexandria, Minnesota and did a lot of OB work. His father just loved it, especially the joy of bringing new life into the world. When Eric went to med school, he knew OBGYN was the right direction for him.

His clinical passion is in the diagnosis and treatment of endometriosis and his mission is to increase awareness among patients, the general public, and the medical community of this condition.  His expertise also includes treatment of fibroids, infertility, bladder incontinence, pelvic floor prolapse, and cosmetic gynecology.

Dr. Heegaard is the proud father of two children. When he is not carefully tending to his patients, he can be found playing his guitar, reading historical fiction, and paging through his library of cookbooks and cooking magazines.

1993-1997 Residency in Obstetrics and Gynecology

University of Minnesota Hospitals and Clinic

American College of Obstetrics and Gynecology